Article from NPR relating to the fact that women in computing peaked in the mid-80s and has gone downhill since.

Modern computer science is dominated by men. But it hasn’t always been this way. 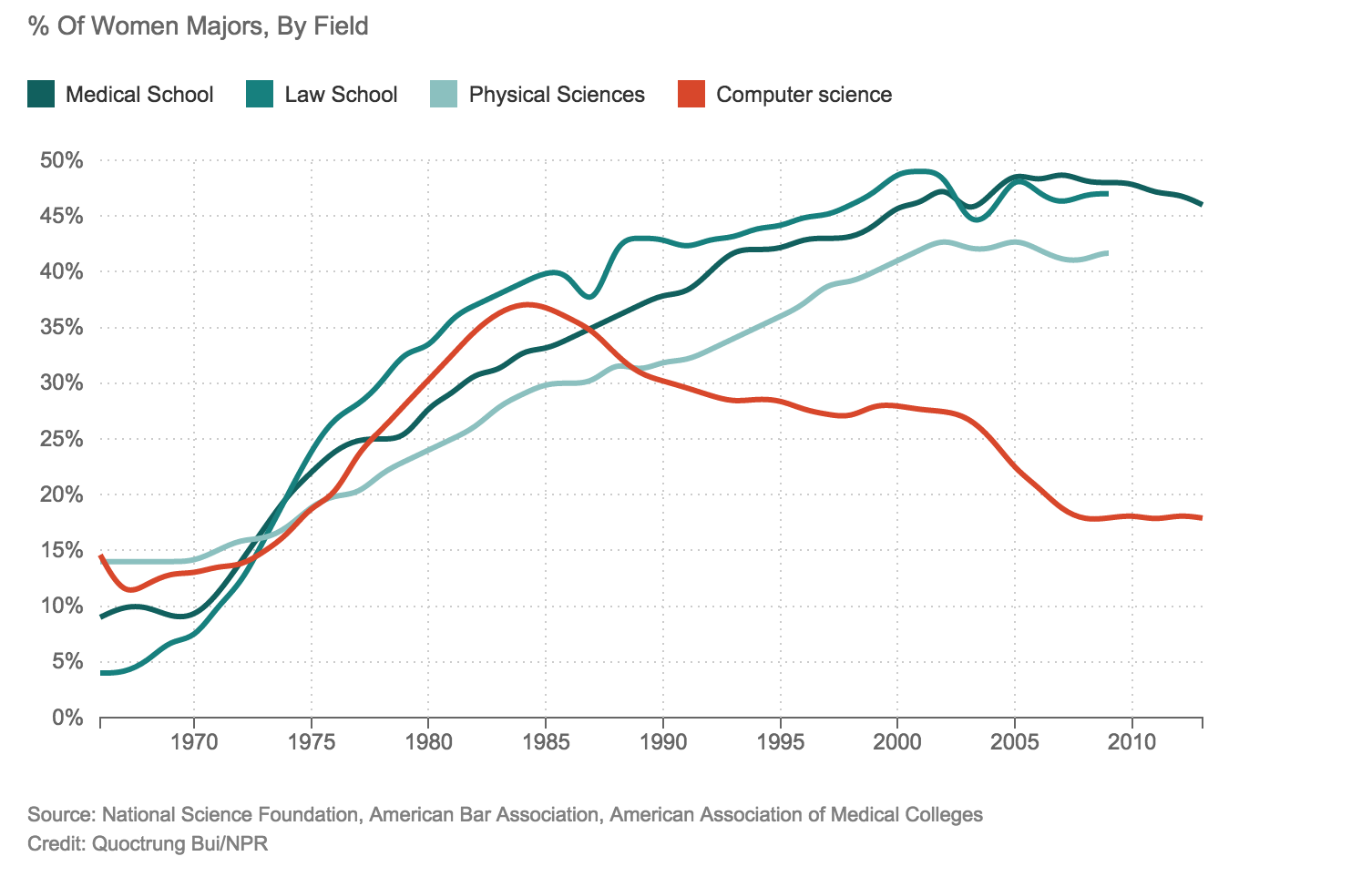 We spent the last few weeks trying to answer this question, and there’s no clear, single answer.

But here’s a good starting place: The share of women in computer science started falling at roughly the same moment when personal computers started showing up in U.S. homes in significant numbers.

These early personal computers weren’t much more than toys. You could play pong or simple shooting games, maybe do some word processing. And these toys were marketed almost entirely to men and boys.

This idea that computers are for boys became a narrative. It became the story we told ourselves about the computing revolution. It helped define who geeks were and it created techie culture.

Movies like Weird Science, Revenge of the Nerds, and War Games all came out in the ’80s. And the plot summaries are almost interchangeable: awkward geek boy genius uses tech savvy to triumph over adversity and win the girl.

In the 1990s, a researcher named Jane Margolisinterviewed hundreds of computers science students at Carnegie Mellon, which had one of the top programs in the country. She found that families were much more likely to buy computers for boys than for girls — even when their girls were really interested in computers.

This was a big deal when those kids got to college. As personal computers became more common, computer science professors increasingly assumed that their students had grown up playing with computers at home.

Patricia Ordóñez didn’t have a computer at home, but she was a math wiz in school.

“My teacher realized I was really good at solving problems, so she pulled me and this other boy out to do special math,” she says. “We did math instead of recess!”

So when Ordóñez got to Johns Hopkins in the ’80s, she figured she would study computer science or electrical engineering. Then she took her first intro class — and found that most of her male classmates were way ahead of her because they’d grown up playing with computers.

“I remember this one time I asked a question and and the professor stopped and looked at me and said, ‘You should know that by now,” she recalls. “And I thought ‘I am never going to excel.’”

In the ’70s, that never would have happened: Professors in intro classes assumed their students came in with no experience. But by the ’80s, that had changed.

Ordóñez got through the class but earned the first C in her life. She eventually dropped the program and majored in foreign languages.

More than a decade later, though, she returned to computers. She found a mentor, and eventually got a PhD in computer science. Now she’s an assistant professor of computer science at the University of Puerto Rico.