As a friend said:

This is just so cool! The math, science, and engineering involved in making this little washing-machine-sized landing craft not only reach Comet 67P/Churyumov-Gerasimenko, but to actually soft land on the thing with a micro-gravity of about 1/100th that of Earth and not simply bounce off is TRULY AMAZING!!

Congratulations to the ESA on a job really well done!!

Rosetta launched way back in 2004, and it has taken 10 years for the tiny craft to catch up to it’s target, Comet 67P/Churyumov-Gerasimenko, out near Jupiter’s orbit.

A recent National Geographic special described the project and the huge tension leading up to a few days ago before the landing was attempted. Now it’s done, and we’re getting signals from Philae on the comet’s surface.

The science in this tiny package is important, as it is surmised they might find water and possibly organic building blocks of life as we know it. 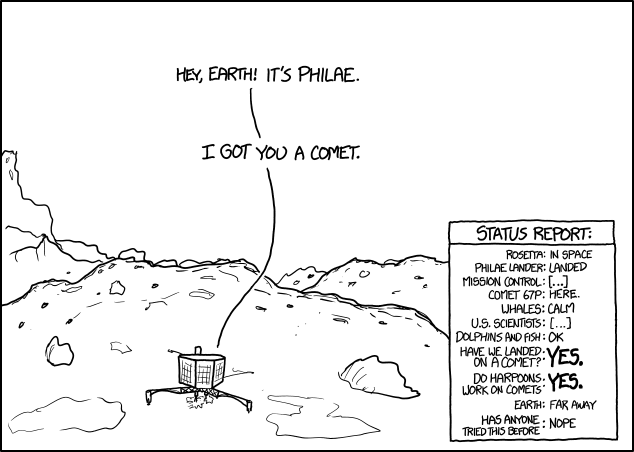 Update: here’s an animated gif of the xkcd comic frames, so far: