The Cassini team graces us with a retrospective showing the Top 10 images Cassini has sent us over the past 10 years the observer has been orbiting Saturn and her moons and rings. 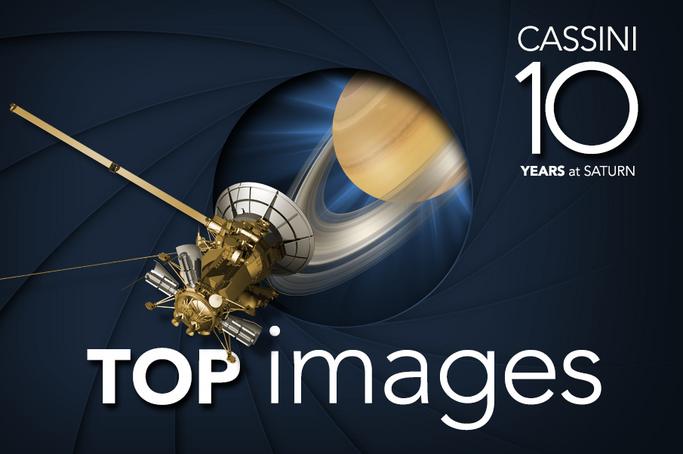 These are ardently spectacular images showing the jewel of our solar system.

The Day the Earth Smiled 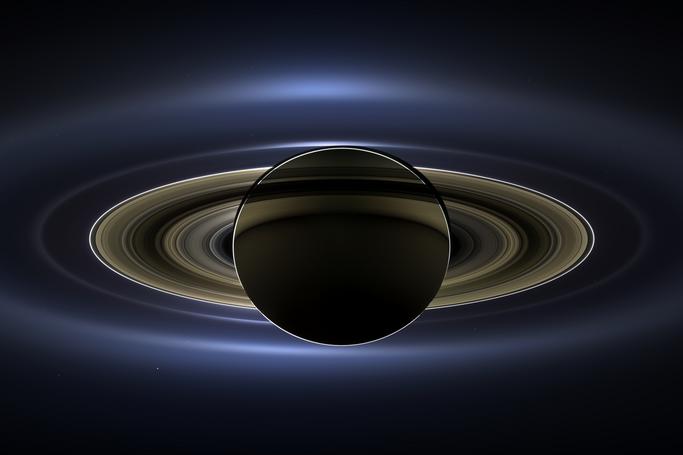 The recent backlit Saturn mosaic (Saturn eclipsing the sun) is one of my favorite images because it gloriously captures all of Saturn's nearby rings, one of my favorite things about the Saturn system. I love seeing the E ring glowing like a giant halo around Saturn. It was also wonderful to witness the tremendous success of the 'Wave at Saturn' campaign and to know that I was part of the team that helped put the event together. My husband and I happily waved at Saturn too! This is an image that only a talented Cassini team could imagine and make come true. Not only that, for me it is truly an amazing work of art as well! – Linda Spilker, Cassini Project Scientist

The Day the Earth Smiled (annotated) 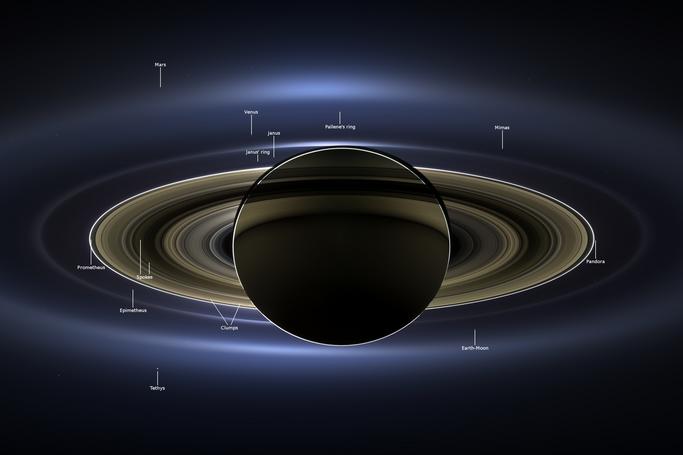 I love this picture for so many reasons. The engineering, math and science needed just to take the picture is mind boggling. The picture is beautiful and the backlighting from the sun stunning. Realizing that the tiny little blue dot is our home planet makes one want to be ever more diligent in preserving our home. In my opinion this picture symbolizes the cumulative knowledge and progress of mankind. – Carmen Vetter, Cassini Program Administrator.

Color-exagerated view of Saturn and its rings 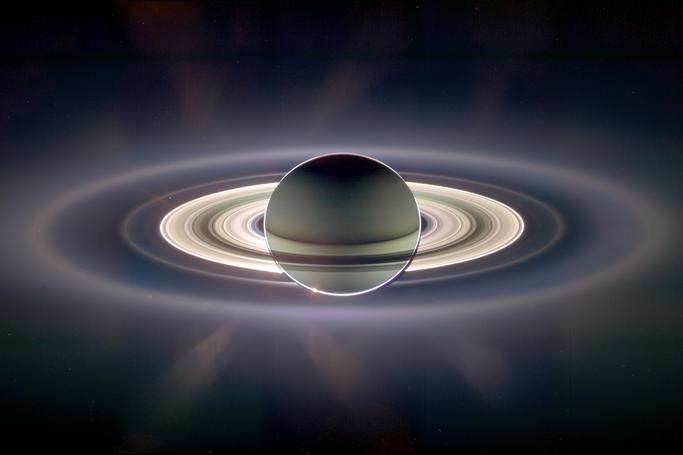 This inspiring image is my favorite because not only do you see the rings in their glory lit by forward scattered light from the Sun behind Saturn, but you also see the pale blue dot of Earth. I like it so much that I have this image on my credit card. – Vance Haemmerle, Cassini Instrument Operations. 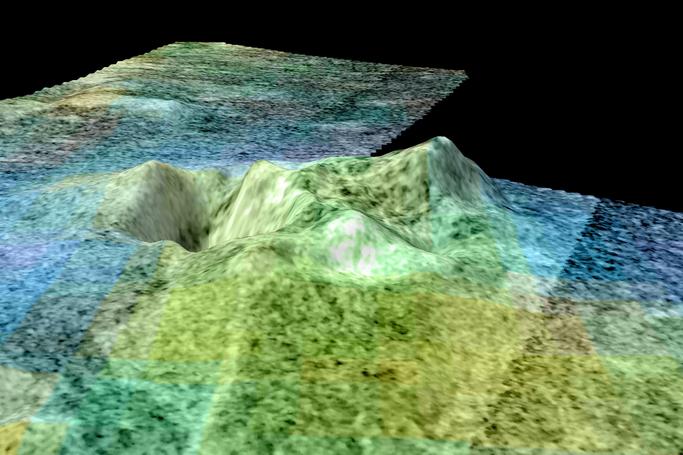 My favorite image is this perspective view of Doom Mons and Sotra Patera on Titan. Although there is still some debate whether cryovolcanic features are present on Titan, this 3-D view and associated RADAR and VIMS data has really convinced most of us. – Rosaly Lopes, Manager, Planetary Science Senior Research Scientist

Saturn’s “A”” Ring From the Inside Out 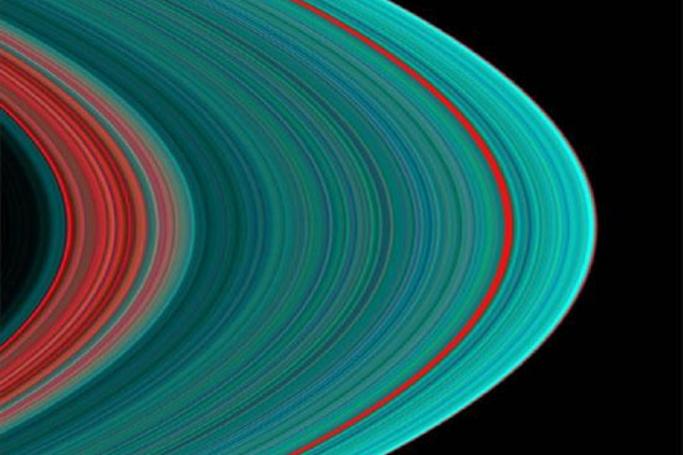 Cassini has allowed us to view the Saturn system through new eyes, seeing things that we could never see on our own. This stunning rendering shows us Saturn’s rings in ultraviolet light, extending our understanding of the rings by showing it to us in a way we could never see without Cassini. – Joshua Colwell, Ultraviolet Imaging Spectrograph (UVIS) Co-Investigator 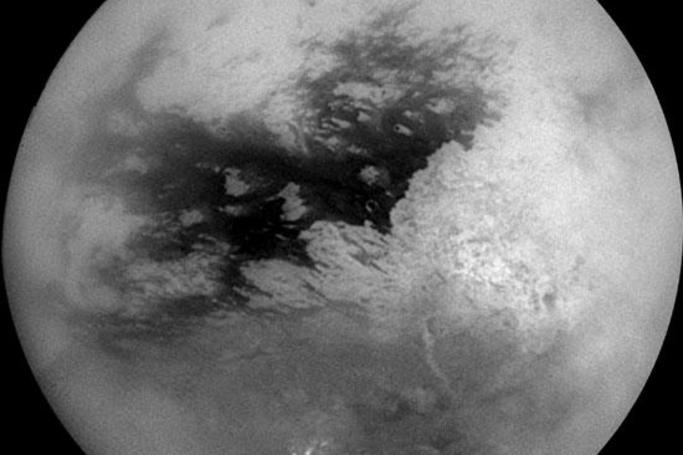 My favorite image is the ISS mosaic from the first close flyby on Titan Oct. 26, 2004. I had been assigned to work on the Titan flybys when I joined the Science Planning team back in 2001. We were working on TA (that first close flyby) as far back as 2002 and it was a very highly prized flyby for all the instruments which made it particularly difficult to negotiate which instrument would be get to control the spacecraft around closest approach. On that October evening as the data and images flowed seamlessly to the earth and were displayed in the room where we were all assembled I remembered all the hard work (all the great work) we had done and the excitement of seeing all our hard work pay off just got wrapped up into this image in my mind. I love it and have a giant printout in my office to this day! – Trina L. Ray, Titian Orbiter Science Team co-chair 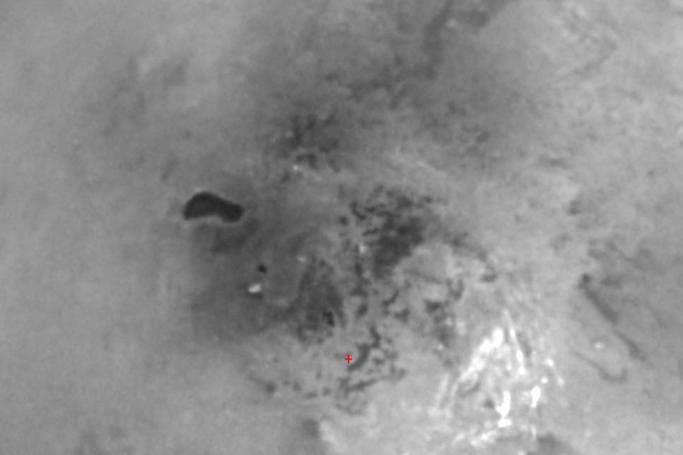 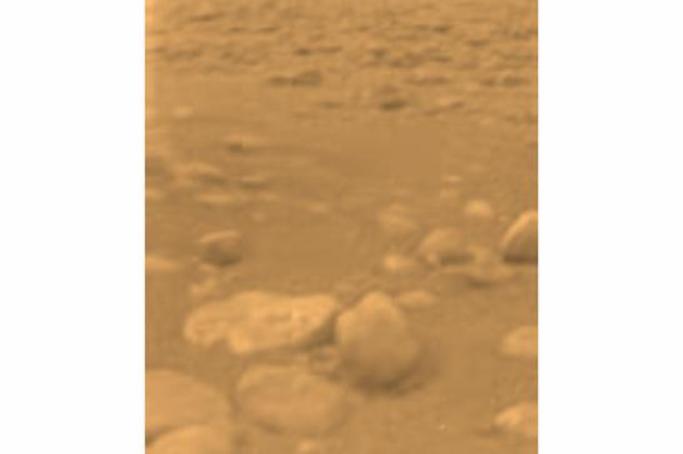 This image (or rather the original black and white version of it) was the first one which popped up on our screen at the European Space Operations Centre (ESOC) in Germany on the night of the descent. Albeit one of the later images taken on the surface, it popped up first because the unpacking software had reset image numbering at 1024 (a bug that was quickly corrected). Not yet knowing that, emotions were overwhelming: We survived impact! Yeah! But where are the images from the descent? Oops … – Bjoern Grieger, research scientist in the group of Horst Uwe Keller at the Max Planck Institute for Solar System Research in Lindau, Germany 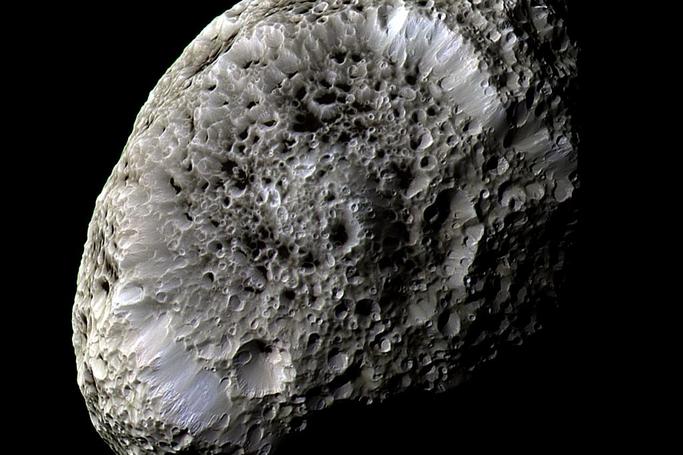 I’m an atmospheric scientist, but I vote for this close-up of Hyperion as my favorite picture from Cassini, because of all the great things we have seen on the mission, this is the one that stopped me in my tracks when I first saw it, and the one that still puzzles me the most. I would love to know the full history of this amazing object. – Fred Taylor, Composite Infrared Spectrometer (CIRS) Co-Investigator 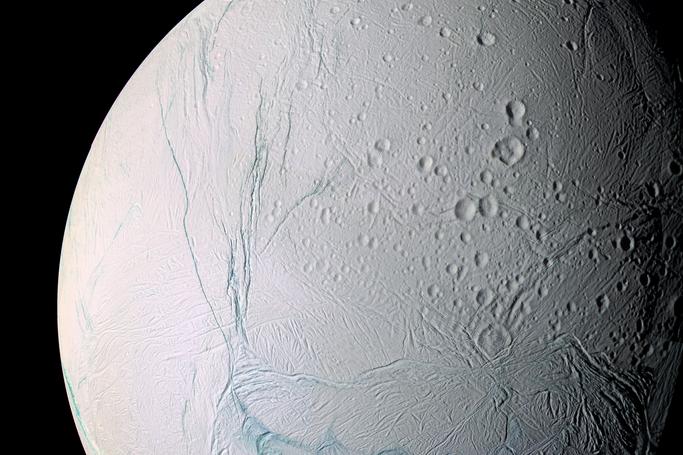 I have scanned across this image at its full resolution many times because there are so many things to see. There’s really a story there. Old, softened craters sliced through by younger fractures. Left of center there is this bundle of deep canyons with little mesas in them – I like to imagine they look like an icy version of Monument Valley in Arizona. Those wrinkles and cracks are just crying out to us that something amazing is going on at Enceladus. – Preston Dyches, Image Caption Writer and Media Relations 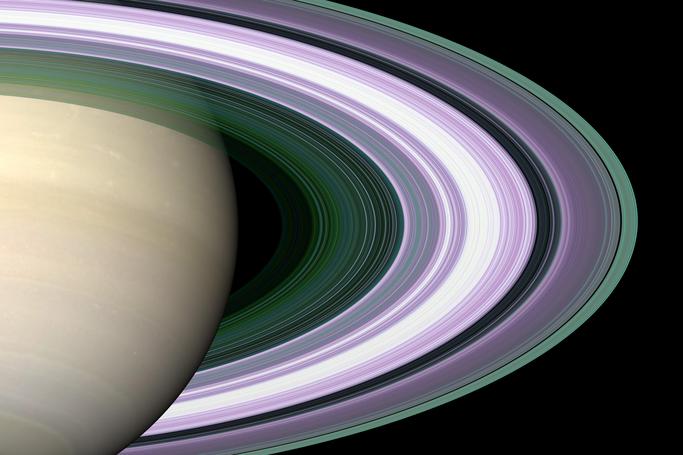 I like to call this 'Dressed in Purple.' It's a unique view of the beautiful ring system as would be seen by a mythical creature having eyes sensitive only to the three Cassini radio science wavelengths. It was a special challenge to create a meaningful, eye-pleasing image that color encodes the different particle sizes across the ring system. – Essam Marouf, Radio Science team member 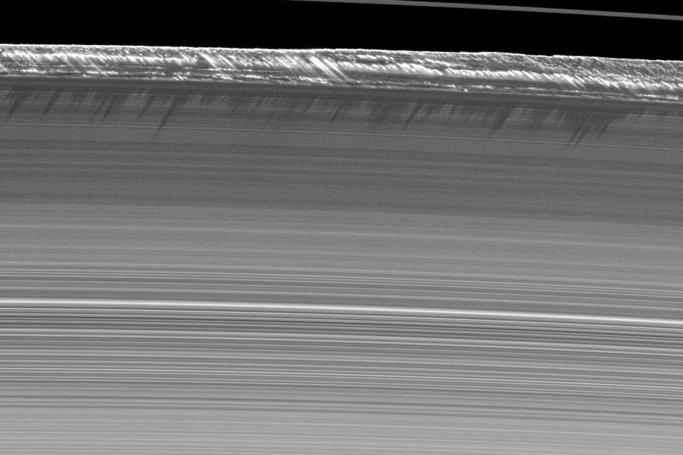 Vertical structures, among the tallest seen in Saturn's main rings, rise abruptly from the edge of Saturn's B ring to cast long shadows on the ring in this image taken by NASA's Cassini spacecraft two weeks before the planet's August 2009 equinox. 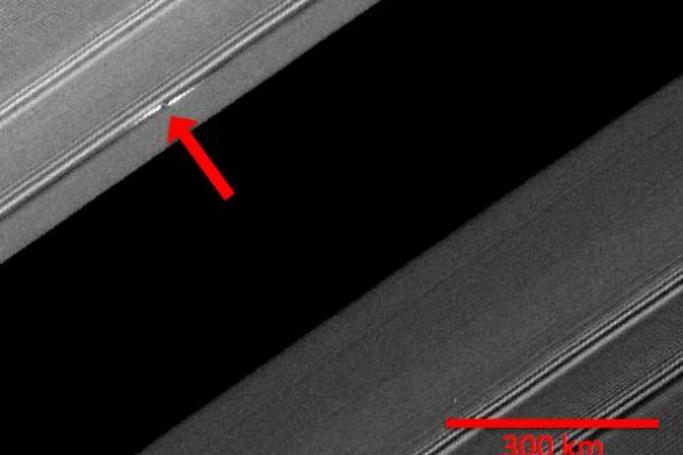 A propeller-shaped structure created by an unseen moon is brightly illuminated on the sunlit side of Saturn's rings in this image obtained by NASA’s Cassini spacecraft.

I was flipping through some A ring images when this magnificent propeller flashed across my screen and took my breath away. At the time, we knew that a different part of the ring had swarms of tiny propellers (small moonlets that create a propeller-shaped disturbance in the ring around them), but nothing nearly as grand as this. To me this remains the most beautiful of the several hundred images we now have of propellers in Saturn’s rings, with its wispy thread of material connecting the two vanes of the propeller. – Matt Tiscareno, Imaging Team Scientist 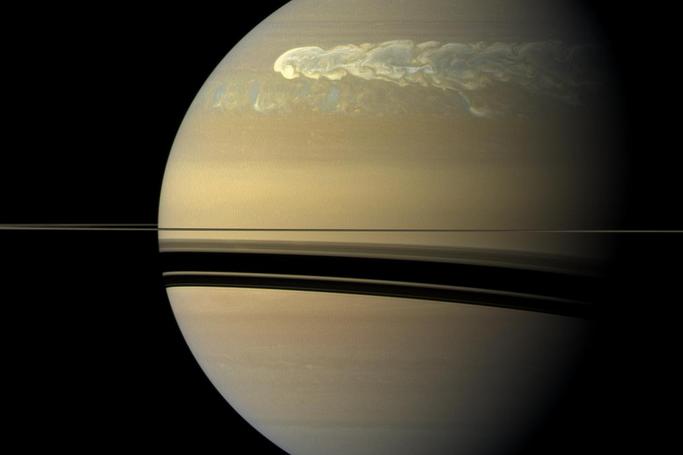 The huge storm churning through the atmosphere in Saturn's northern hemisphere overtakes itself as it encircles the planet in this true-color view from NASA’s Cassini spacecraft.

The image shows the sheer elegance of the planet Saturn. The thin ring system is casting a vast shadow. The subtle and quiet looking color hue of Saturn's atmosphere is contrasted by the 'Great White Spot' in the northern hemisphere. This giant thunderstorm on Saturn was an unexpected event from which we have learned a lot about the dynamics of Saturn's atmosphere. – Georg Fischer, Co-Investigator of Radio and Plasma Wave Science (RPWS) team

Thank you NASA and Team Cassini! You’ve enlightened and illumined my life this past decade.