A recent article in The Guardian offers up the stark reality of what it is like to be subjected to the torture of solitary.

Read on to hear a personal hell.

I spent more than five years of my sentence in ‘the box’, for trivial violations. It’s time we saw this casual abuse for what it is: torture 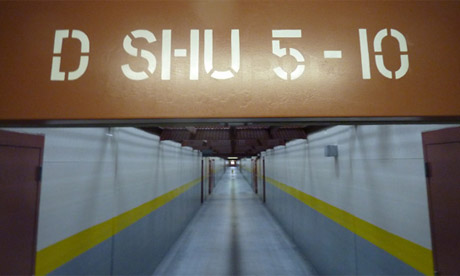 No light at the end of the tunnel: an SHU at Pelican Bay prison, California. Photo by Michael Montgomery, The Center for Investigative Reporting.

As kids, many of us imagine having superpowers. An avid comic book reader, I often imagined being invisible. I never thought I would actually experience it, but I did.

It wasn’t in a parallel universe – although it often felt that way – but right here in the Empire State, my home. While serving time in New York’s prisons, I spent 2,054 days in solitary and other forms of isolated confinement, out of sight and invisible to other human beings – and eventually, even to myself.

After only a short time in solitary, I felt all of my senses begin to diminish. There was nothing to see but gray walls. In New York’s so-called special housing units, or SHUs, most cells have solid steel doors, and many do not have windows. You cannot even tape up pictures or photographs; they must be kept in an envelope. To fight the blankness, I counted bricks and measured the walls. I stared obsessively at the bolts on the door to my cell.

There was nothing to hear except empty, echoing voices from other parts of the prison. I was so lonely that I hallucinated words coming out of the wind. They sounded like whispers. Sometimes, I smelled the paint on the wall, but more often, I just smelled myself, revolted by my own scent.

There was no touch. My food was pushed through a slot. Doors were activated by buzzers, even the one that led to a literal cage directly outside of my cell for one hour per day of “recreation”.

Even time had no meaning in the SHU. The lights were kept on for 24 hours. I often found myself wondering if an event I was recollecting had happened that morning or days before. I talked to myself. I began to get scared that the guards would come in and kill me and leave me hanging in the cell. Who would know if something happened to me? Just as I was invisible, so was the space I inhabited.

The very essence of life, I came to learn during those seemingly endless days, is human contact, and the affirmation of existence that comes with it. Losing that contact, you lose your sense of identity. You become nothing.

Everyone knows that prison is supposed to take away your freedom. But solitary doesn’t just confine your body; it kills your soul.

Yet neither a judge nor a jury of my peers handed down this sentence to me. Each of the tormented 23 hours per day that I spent in a bathroom-sized room, without any contact with the outside world, was determined by prison staff.

Anyone lacking familiarity with our state prison system would probably guess I must have been a pretty scary, out-of-control prisoner. But I never committed one act of violence during my entire sentence. Instead, a series of “tickets”, or disciplinary write-ups for prison rule violations, were punished with a total of more than five years in “the box”.

In New York, guards give out tickets like penny candy. During my nine years in prison, I received an endless stream of tickets, each one more absurd than the last. When I tried to use artwork to stay sane, I was ticketed for having too many pencils. Another time, I had too many postage stamps.

For the five years I spent in the box, I received insulin shots for my diabetes by extending my arm through the food slot in the cell’s door. (“Therapy” for prisoners with mental illness is often conducted this way, as well.) One day, the person who gave me the shot yanked roughly on my arm through the small opening and I instinctively pulled back. This earned me another ticket for “refusing medical attention”, adding additional time to my solitary sentence.

My case is far from unusual. A 2012 study by the New York Civil Liberties Union found that five out of six of the 13,000 SHU sentences handed out each year are for nonviolent misbehavior, rather than violent acts. This brutal approach to discipline means that New York isolates its prisoners at rates well above the national average.

On any given day, some 4,300 men, women, and children are in isolated confinement in the state, many for months or years. Those with more serious prison offenses have been held in solitary for 20 years or more.

Using this form of punishment is particularly absurd for minor rule infractions. But in truth, no one should be subjected to the kind of extreme isolation that is practiced in New York’s prisons today. I have no doubt that what is going on in prisons all over our state is torture. Many national and international human rights groups – including UN special rapporteur on torture Juan E Méndez – concur. Yet it continues, unseen and largely ignored by the public.

The scars that isolated confinement leaves behind may be invisible, too, but they are no less painful or permanent than physical scars. Even now that I am out of prison, I suffer major psychological consequences from those years in isolation.

I know that I have irreparable memory damage. I can hardly sleep. I have a short temper. I do not like people to touch me. I cannot listen to music or watch television or sports. I am only beginning to recover my ability to talk on the phone. I no longer feel connected to people.

Even though I am a free man now, I often feel as though I remain invisible, going through the motions of life. Feeling tormented by a punishment that has ended is a strange and unnerving anguish. But there are thousands like me, and until New Yorkers choose to bear witness to the soul-destroying torture taking place in their own backyards, our suffering, too, will remain invisible.