It’s all about the food, innit?

So turkey day, two thousand and fourteen is here. I started preparing stuff for our threesome’s family meal yesterday, by making a pumpkin pie, cornbread for the dressing, and cranberry sauce.

The event wouldn’t be complete without at least one crise du cuisine and this years was trying to get some old pie dough I had in the fridge to unroll cleanly. It didn’t. It stuck to itself. It wouldn’t come cleanly off. le sigh.

Luckily, Mom was there to save the day. I did manage to get it mostly unrolled and onto the pie plate, but with these huge holes in it. With careful pressing, cutting excess fringe, and tapping into place, Mom made the pie crust work. In went the pie filling, with a bit left over, and it baked up nice as you like.

The pumpkin pie, chortling merrily to itself: 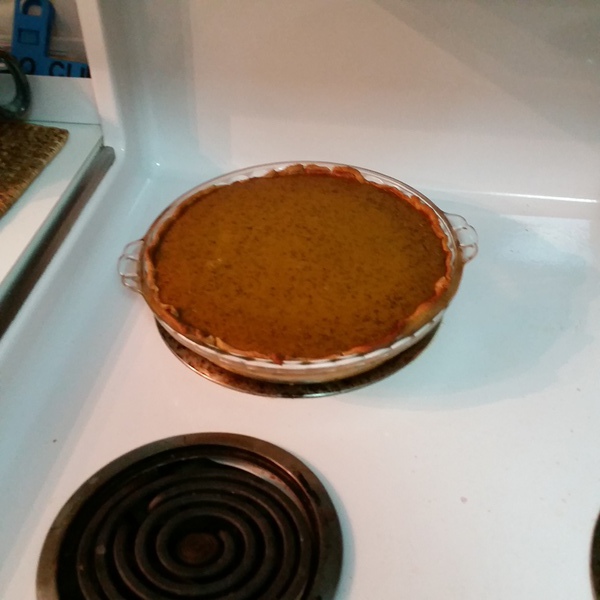 Making the cornbread was dead easy, as it’s just a box of the Jiffy mix, a negg and du l’eau, and in a greased pan for 20. “BAM!”.

The cranberry sauce was a bit of a problem, as it had too much liquid, so was really more like soup than sauce.

With that all done, my back aching, my feet crying, I shuffled off to bed leaving a hugely messy kitchen.

After a great breakfast of oatmeal with dates, Mimsy and I reconnoitered around the rest of the meal. Neither of us could quite remember the equation for how many minutes per pound to cook an unstuffed bird, but after investigating a few places, settled on 15 minutes per pound. (This is now recorded in my recipe file.)

Here’s the notes for the meal: 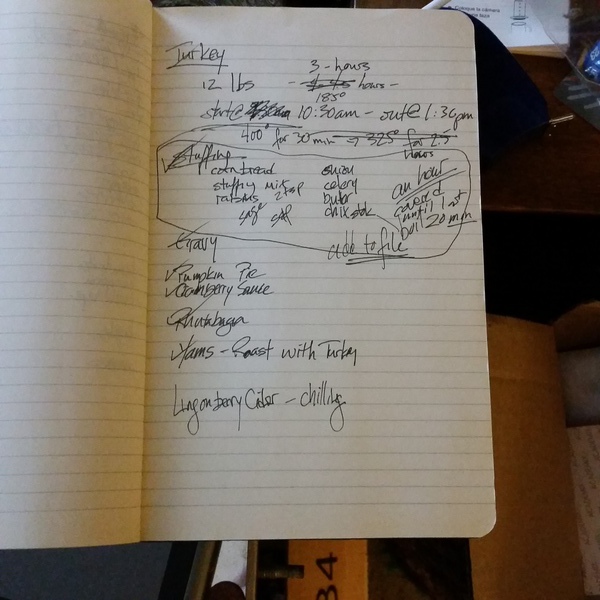 Washed, drained, patted dry and set aboard a roasting pan. Breast skin slit open with butter liberally applied within. Salt and pepper in the cavity and over the top, with montreal chicken season sprinkled on top as well.

This was the bog-standard family dressing, cornbread and stale bread crumbs, onions, celery, chix broth and, of course, raisins! Can not do dressing without raisins. :) This time, I used 1/4 cup regular brown raisins and 1/4 cup golden raisins. I didn’t have enough sage, but it still worked out well. Yummy stuff.

I had two fairly good-sized yams, but they were these odd shaped things, so I ended up making them into oven fry wedges and roasting them with the dressing. The usual treatment: spray with cooking oil lightly, sprinkle on a bit of seasoned salt, pepper, and Old Bay seasoning.

A Swedish tradition, at least in our Swedish household, boiled up some cubed rhutabags. Simple, easy, nothing to it.

The sauce I made last night was still all runny, so I did the horrible thing of pitching it and remaking it with the right amount of liquid. Much better.

The turkey came with a gravy packet inside, which I used with the pan drippings and a bit more water. This came up marvelously, not too salty.

The problem was serving it. The usual serving pitcher was in the dishwasher, running mid-cycle. Oops. A pewter gravy boat was suggested, but whoa what a mistake. That boat takes on all the heat of whatever is in it, so it was impossible to pour out of or pass. Sacrificing pretties for safety, I used a measuring pitcher instead. Worked a treat.

I wish I had taken a picture of the table. I think I did a fair job on setting and presentation.

Here, at least, is my plated serving: 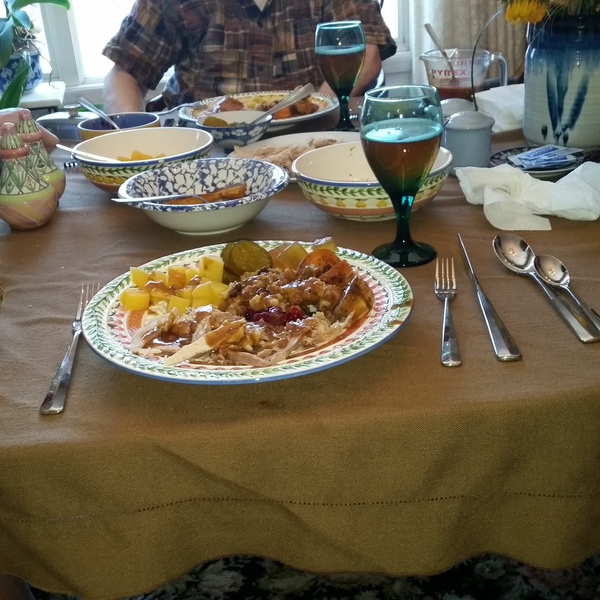 Everything was super delicious.

Much cheer and fun was had by us.

Happy Thanksgiving whereever you are!