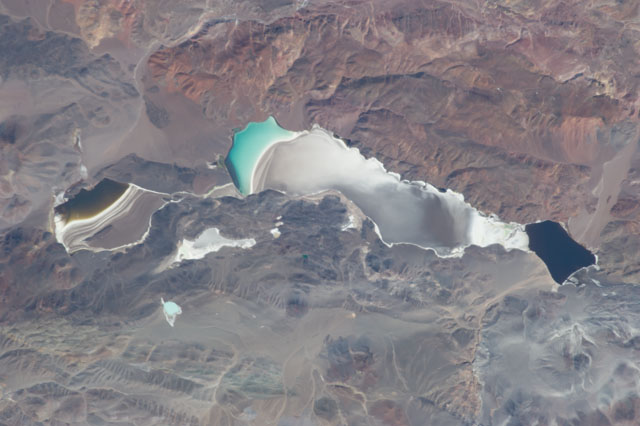 This striking and detailed astronaut photograph from the International Space Station shows water of different color within subbasins of the Laguna (lake) Verde in the high Andes of northwest Argentina. The lake floor as a local low point lies at 4095 m (13,438 feet) above sea level, whereas the peak of the local volcano west of the lake (not shown) reaches over 3000 meters higher (6818 m, 22,368 feet). Laguna Verde (58 km wide, 36 km long) often appears green, giving rise to its formal name.

This image shows the turquoise tint in the central subbasin (image center), with a yellow to black tinge to water in the southern subbasin at image left (also known locally as Laguna Negro). The northernmost basin at image right appears quite black, and the large gray zone comprising much of the rest of Laguna Verde is likely a combination of shallow water, only inches deep, and sunglint reflecting off the water surface. The reason for the color differences lays in the fact the many different families of salt-loving organisms occupy hypersaline lakes such as Laguna Verde. These appear as different colors — often bright – depending on the salinities and temperatures of each water body or subbasin.

The rest of the lake floor is dry and appears white from the build-up of thick salt deposits. Parallel lines around the southern subbasin (Laguna Negro) indicate prior shorelines of this shrinking water body — evaporation removes water but leaves ephemeral shorelines marked with white salt.